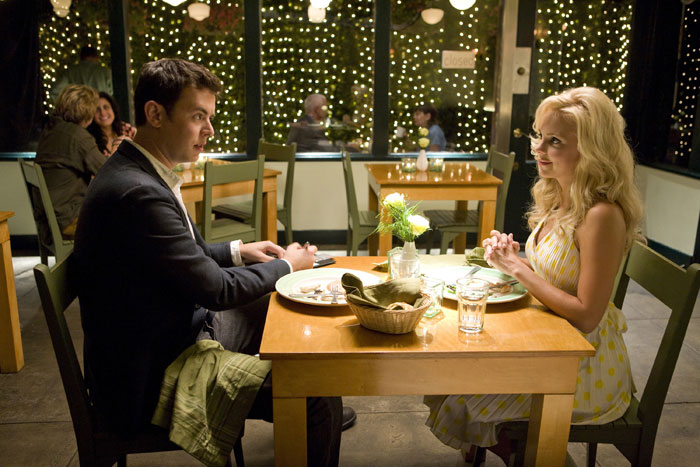 There are a couple of ways to think about this: either you’re trying to make a good first impression (and not rock the boat too much, lest you scare off your date), or you’re laying all your cards on the table. I’m more of a believer in the second strategy. Better someone know that I dig skanky florals sooner rather than later. Still, the following list will satisfy both camps. And many of them can be worn safely to dinner (numbers 7 and 8, excepted).

Great on a man or woman. Both casual and dress-up-able. A great thing to wear if you don’t want to seem like you care too much. (Not that I’d ever recommend that.) Dior Homme is somehow both youthful and substantive; rakish enough for a kid, but potent enough for someone with backbone. And if it’s good enough for Bertrand Duchaufour, it’s good enough for you.

A perfume for tender souls. It’s got classical glamour in spades, but it’s light and streamlined enough for drinks somewhere chic and upscale. Less overtly sexy than it is beautiful and romantic. If you really love perfume, Après l’Ondée is a must.

For a label known for making us squirm (Secretions Magnifiques, anyone?) this juice is some of the cuddliest and most instantly winning around. Like This spans a wide spectrum from sweet pleasures to charming oddball. Unassuming but fascinating.

Many tears have been shed over the current state of Edmond Roudnitska’s masterpieces. These days, Parfum de Therese is probably the closest you can get to a great fruity chypre from the guy who owns fruity chypres. (He owns them.)

If dating for you is more of a power struggle, then Cuir de Russie may be your bag. Never has anything smelled so purely of excess disposable income. And be sure to get the parfum; the eau de toilette is nice, too, but with nowhere near the sock-in-the-jaw pop of its big sister.

One of the weirdest “masculines” on the market. It’s like smelling someone hard at work in a very “eclectic” greenhouse. Sweaty yet crisp. Floral yet hairy-chested. If you want sultry and mysterious with a dash of the exotic, look no further.

Before every label turned out an “amber,” Serge Lutens gave us this spicy jewel. On the Swoon Scale it’s at least an 8. Just good, salty fun.

Carnal Flower may very well be Dominique Ropion’s apology for composing Amarige, the stuff that convinced an entire generation that they hate perfume. I defy anyone to smell this stuff without thinking of sex.

Sycomore checks so many different boxes it’s hilarious. Bright and sunny? Check. Office appropriate? Check. Sexy as all-get-out? Like, whoa. In typical Chanel fashion, a perennial favorite (in this case, vetiver) has been rendered almost unrecognizable, reformed into the platonic ideal of “golden-green.” Perfect for almost any occasion.